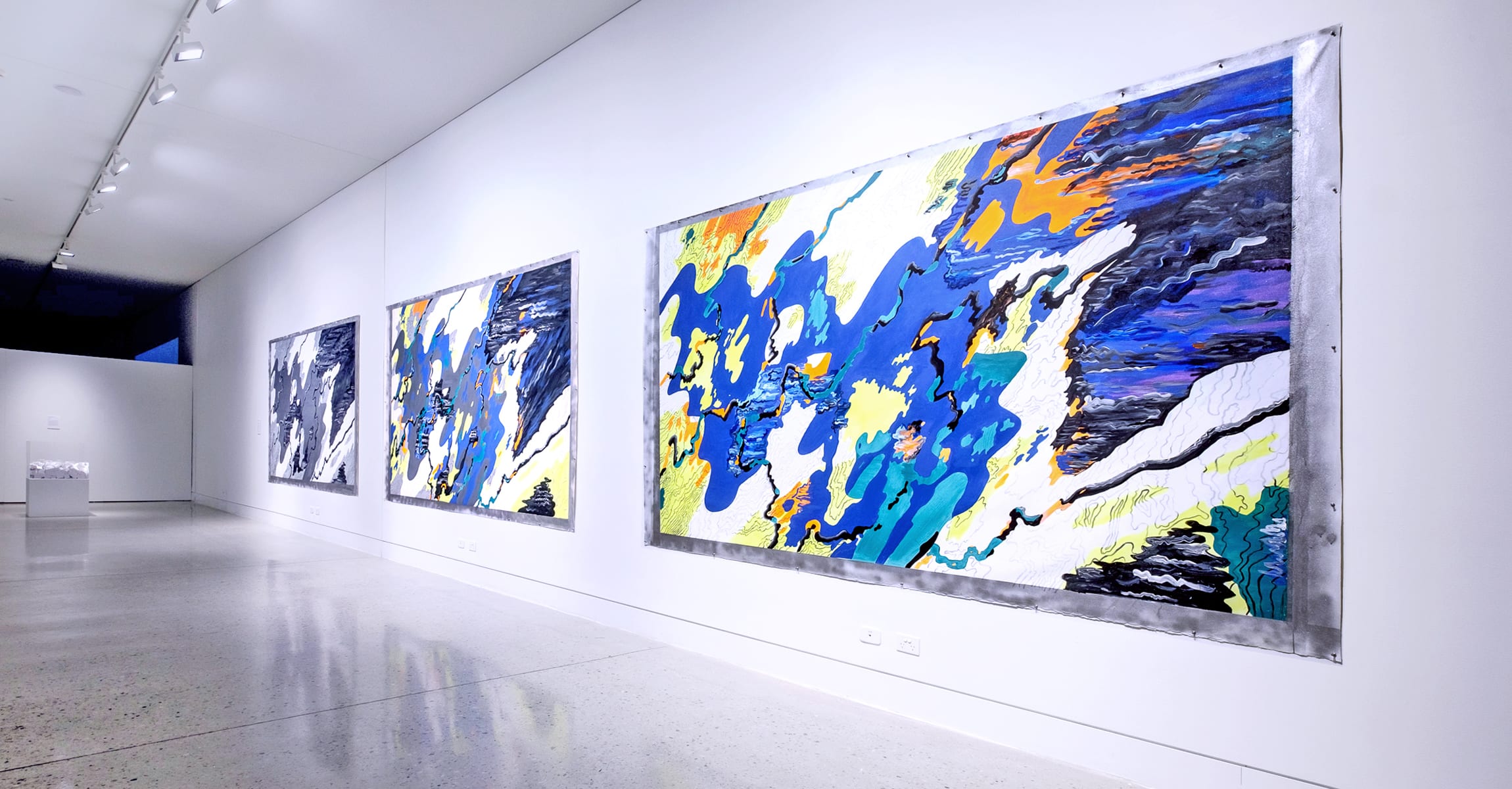 ”The work ”Figure 4” attempts to think about ways of depicting and reflecting about changes in languages in Australian society after colonisation. ”Figure 4” is described in a paper of Nicholas Biddle, ”Indigenous Language Usage”, Indigenous Population Project, 2011 where he writes that: ”There were between 200 and 300 Indigenous languages spoken in Australia at the time of European colonisation. These figures rise to between 500 and 600 when one makes less distinction between a language and a dialect. However, according to McConvell and Thieberger (2001), less than half of these languages are still spoken, with many more currently endangered. Specifically, according to the most recent National Indigenous Languages Survey (Department of Communications, Information Technology and the Arts 2005), of the 145 Indigenous languages still spoken in Australia, 110 are severely or critically endangered. Despite this decline in the number of languages spoken since colonization, data from the most recent (2011) Census shows that there were 60,550 speakers of Indigenous languages across Australia. Most of these, however, were concentrated in four jurisdictions—the Northern Territory, Queensland, Western Australia, and South Australia ” p.2

‘”The changes of the color” are three large-scale paintings that focus on a perception of colors. Inspired by the discussion with Rea Bolotin about the notion of color in the Australian landscape, the work is an attempt to show – what Anish Kapoor accurately described – that colors belong to places. The work is based on my own experience in which one day during the residency in Bilpin I was preparing the digital sketch for a painting of a landscape. Doing so, I have not noticed that I had been applying on this painting, the range of colors, which I had been using before in my previous – based on the digital aesthetic – works.  Rea Bolotin wisely pointed out that I brought these colors with me like in a suitcase. By this act, I did a very similar thing to early colonial painters who came to Australia and painted with the colors they knew from home. Three paintings in the exhibition show the same imaginary landscapes. The landscape’s base is the same on each, however, the bright colours are gradually replacing the old grey, chromatic base.

”Lottery” is a work that focuses on crossing the Blue Mountains by three explorers: Blaxland, Wentworth, and Lawson in 1813. The work is a collection of quotes from different books of different authors who wrote about this particular event. Although, the crossing itself is a well-known fact in Australia, the meanings of the crossing and its details vary depending on the author’s perspective or the person who is talking about it. Through the work” Lottery,” I am trying to shed light on the ambiguity of the ”facts” in history and raise awareness about thinking through a single story.

‘‘Topographical map” is a floor drawing inspired by a western concept of a map, understood as a tool for navigating a terrain. In the drawing, I am interested in a particular map feature that is a contour line. The arrangement of a contour line in a map indicates the stoop of a terrain. Through the large scale drawing in the gallery, I am interested in returning to the ways of feeling/understanding of a landscape.

‘‘Two faces – Two Mountains” is a wall painting relating to the mountainous landscape of NSW. The painting serves as a visual metaphor of two different concepts/ ways of navigating a terrain by Indigenous and Non – Indigenous people. It relates to the attempts of many early explorers who had been trying to cross the Blue Mountains using valleys rather than ridges. The work points out a connection between people, their relation with land, and a different kind of knowledge from the landscape. It is inspired by the psychology of seeing and ambiguous or bi-stable, two-dimensional forms (Rubin vase) developed around 1915 by the Danish psychologist Edgar Rubin.